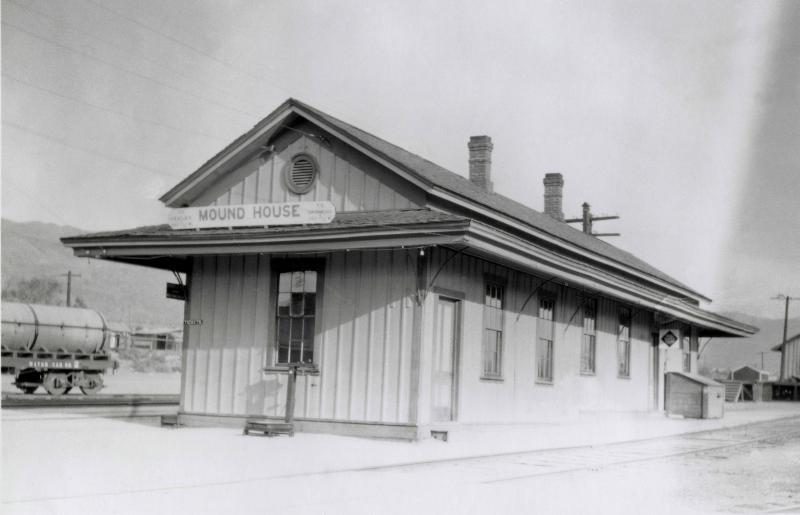 The Mound House train depot is seen here, in this view to the north. On the left is the standard-gauge V&T Railroad, and to the right the narrow-gauge Carson & Colorado.

Source Caption: The Mound House passenger depot seen here, dates back to the early 1880's with the advent of the Carson and Colorado Railroad from this point. In this undated view, the photographer was looking northwesterly towards the passenger depot. Probably taken in the 1910s - based on the well maintained appearance of the building and its surroundings, (and some minor architectural differences) in contrast to later views taken in the 1930s when the building and rail yards appear abandoned and forlorn. Additionally, the Southern Pacific style Mound House sign appears on the south side of the depot in this image, while in later years (1930's), the sign on this end of the structure had been removed, and not replaced, as SP no longer had any interest in the depot after 1934. Virginia and Truckee Railroad Water Car No. 2 can be seen across the railroad tracks (it provided the water supply for Mound House [NSRM website]). SP railroad (former Carson & Colorado) tracks on right (east) side of building. The freight depot is partly visible to the right (north) of the passenger depot. The old passenger depot was sold by the V&T on May 25, 1938, with the provision it be moved off site within 30 days (NSRM personal communication 2014). The new owner complied, and consequently the structure was removed by early June, to a new location on N. Carson Street in Carson City (same block as the present City Center Hotel) where it was used as a warehouse (Wurm 1983). Subsequently, in the mid-1950s, the structure was moved a block south across Washington St, and then moved one last last time a few years later to a site near Lone Mountain Cemetery, where it was used as a residence. The old depot apparently burned down sometime in the late 1960's (NSRM personal communication 2014). One of the two Mound House signs from the depot is the only known surviving remnant of the building, and now resides in the Nevada State Museum in Carson City. Image acquired for personal photo collection.