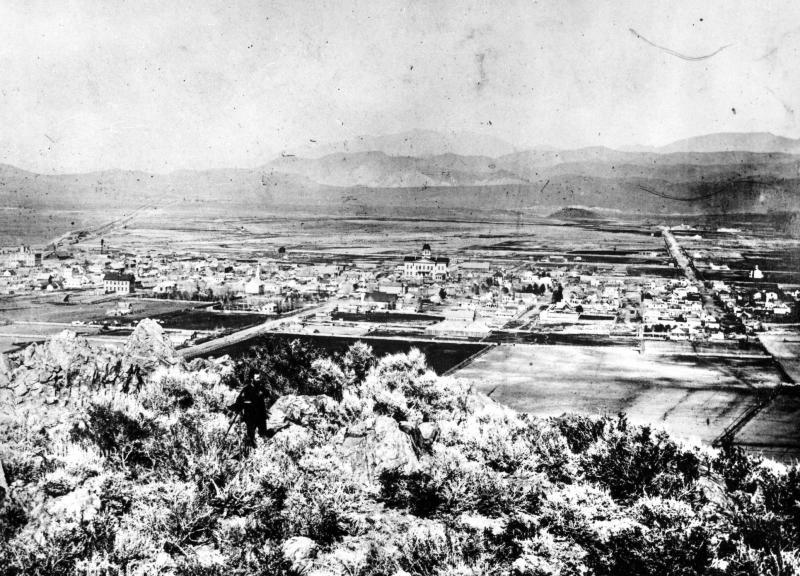 This view of downtown Carson City looks down from an outcropping of rock partway up C Hill. You can see a member of the photography crew standing in the brush in the foreground.

Looking at town, several landmarks stand out. On the far left you can see the U.S. Mint building. Heading diagonally up to the right from there is the scar of the Virginia and Truckee railroad tracks heading up to Virginia City. A little bit to the right there is a very prominent two-story white building with a dark roof. This is the Central School at the corner of Minnesota and Telegraph Streets. Further to the right the Methodist Church stands out with its white steeple.

Near the center of the photo, the State Capitol building is the largest building in town and the most visible building in this photo. And on the right edge of the picture, Fifth Street cuts its way through the desert on its way out to the Nevada State Prison.

From this distance, the rest of the town kind of blurs together. Even big landmarks like the Ormsby House and the First Presbyterian Church are hard to pick out, even from this high vantage point. Nearly the entire town is visible in this picture, from Washington Street in the north to Sixth Street in the south. Another thing to notice is the lack of trees in town in this photo, which places it fairly early in Carson's history. That, plus the fact that the 1891 Post Office is missing, dates this photo in the 1870s or 1880s.

Source Caption: From the northeast small hill in front of C Hill. Date unknown but probably between 1869 and 1900 sometime.