Date of photo: May 1950
Photographer: Unknown 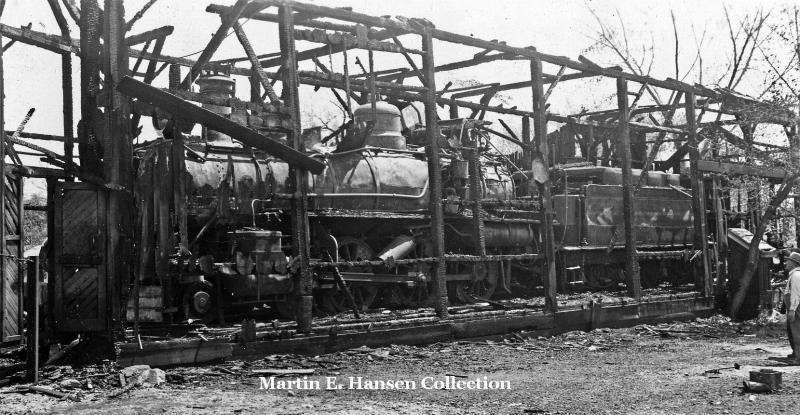 This photo shows the aftermath of the fire, the heavily damaged engine within the charred remains of the enginehouse. The engine never ran again, and it was soon scrapped.

Source Caption: Certain events that occurred in the steam era were just too bizarre to have been made up. The fiery death of this famous locomotive is one such event. By early May, 1950 the owners of Nevada's fabled Virginia & Truckee railroad had seen the writing on the wall. The traffic on the line had fallen off to such an extent they had filed for abandonment of "The Silver Shortline" and the last run was scheduled for May 30, of that year. With the tube time for V&T's #27 having expired, the chosen power for the last run would be capped-stacked #26. This locomotive was the second to the last new locomotive delivered to the V&T and had been the darling of visiting railfans after the sale of the older V&T power to the Hollywood movie studios a few years earlier. Unfortunately, #26 had other plans. When her run was completed on May 1, 1950, and #26 had been stowed inside the single stall wooden enginehouse in Reno, her crews walked away thinking they were done for the day. However, a few minutes after they had started for home they could hear the blare of fire-engine sirens and they turned to see a pillar of black smoke rising over the skyline back from the enginehouse that they had just left. By the time the returned the structure was fully engulfed in flames and by the time the fire department put out the fire, #26 was in shambles as we see here. Clearly #26 could not be repaired for the last run that was only weeks away. While the V&T could have used their 2-8-0 #5 that they had purchased from the Nevada Copper Belt in 1945, that big ALCO did not have the feel of the old V&T that the railroad wanted for the last run. Within days of the fire that destroyed #26 the V&T shop men contacted the ICC and worked out a waiver for old #27 so she could do the honors on the last run at the end of the month. After #27 performed the last run, #5 had the somber duty of towing the hulk of #26 and herself to a yard in Reno where both would fall to the scrappers torch. #27 would live on as she was donated to the Governor of the State Of Nevada and today she resides in the in the Nevada State Railroad Museum in Carson City. She was truly saved by the fire that took #26.