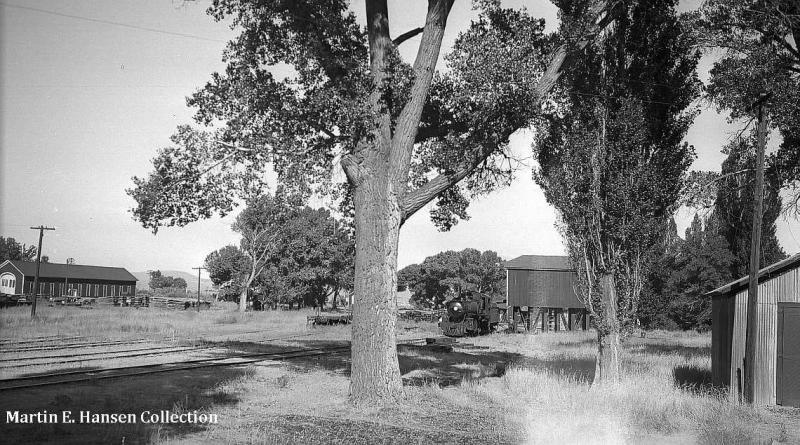 A view of the Virginia and Truckee Railyards in Carson City, with V&T locomotive #27 at the water tank. The paint shop is seen in the distance to the left. The water tank was located around the present-day intersection of Stewart and Washington streets. The paint shop is where the Smith's supermarket is today.

Source Caption: All too many times when we capture on film a piece of railroad equipment performing it's daily tasks we may be more interested in the details of the motive power involved and thus we train our camera on that as the primary focal point of our shot. In doing this we may be missing the setting of the train which can be of equal or greater interest in later years. An example of a photographer who captured a scene rather than just another engine roster shot is this fine photograph taken by Ralph Demoro in the 1940's. The location is Carson City, Nevada and the activity that Ralph was witnessing was V&T #27 taking on water before her next trip on The Silver Shortline. It would have been easy for Ralph to simply walk up to the engine and capture her up against the wooden water tank as the subject of his photograph. However, he saw there was more to be seen and captured on film that day than simple the engine and part of the water tank. There was the yard scene itself that surrounded the engine and tank that was the real subject to be savored. By taking a few steps back Ralph saved for us on film the wonderful shade created by the huge old cottonwoods that had grown over the decades in the rail yard. To the north we see the old paint shop used to keep the passenger cars and other equipment of the V&T in pristine shape. In the distance to the North east we see the hills of the Comstock where the original mines of Virginia City are located. It was the mines in those hills that was the reason the V&T was built in the first place. The water tank and locomotive actually look relatively small when viewed in the large yard that lies immediately to the east of the huge stone enginehouse that is over the left shoulder of Demoro when he takes this photo. Soon the watering up will be completed and #27 will slowly chuff past Mr. Demoro as she proceeds up to the Carson City depot where her train of cars bound for Reno awaits her. For now, however, lets just drink in the scene as we can almost feel the warm breeze on our back as it rustles through the leaves of the cottonwoods.