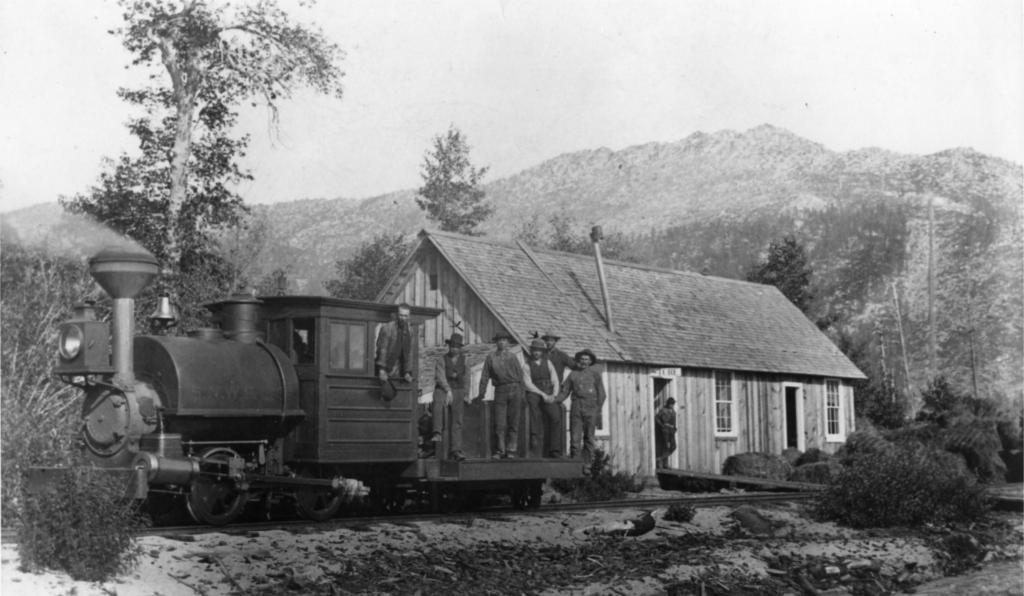 A locomotive of the Crystal Bay Railroad poses for the camera. The Crystal Bay Railroad ran from Sand Harbor to present-day Incline Village, and was used to transport the logs of the Sierra Nevada Wood and Lumber Company. The railroad also included an inclined section, which went up the mountains at a steep angle to the summit, where logs would be placed in a flume and sent down the other side to Washoe Valley.

Source Caption: One of the more impressive railroad operations in Nevada was once located at Lake Tahoe in present day Incline Village. In 1880, the Sierra Nevada Wood and Lumber Company (SNW&L) completed an incline railway to haul lumber over the Carson Range. A double-track, cable-powered incline railway was built near a sawmill along Mill Creek, extending 4,000 feet up the mountainside and covering 1,400 fee...t of elevation. From there, the lumber floated on a flume along the eastern slope of the Carson Range to Lakeview. At Lakeview, the lumber would be transferred to the Virginia & Truckee heading to the Comstock. The SNW&L flat cars were specially designed to handle the incline railway, with loaded cars hauled up on the north track, and empties lowered on the south track. In the photo, to the right of the Marlette & Folsom Store, you can see the path of the incline railway up the side of the mountain. The SNW&L constructed a narrow gauge railroad along the shores of Lake Tahoe to gather logs being transported across Lake Tahoe. The railroad extended from Crystal Bay in the west and Sand Harbor in the south, with a few branches within Incline. Today, much of the current SNW&L railroad right-of-way is part of present day Nevada Highway 28. The railroad operated from July 1881 until the end of the 1894 season when the logging operations in the Lake Tahoe Basin were in decline. The SNW&L moved their operations and the railroad equipment to Overton (later Hobart Mills), north of Truckee, California. In the photo a SNW&L train crew poses with their saddle tank locomotive near the shores of Lake Tahoe. R. J. Waters photo, NSRM Collection. See More