View from the Dome 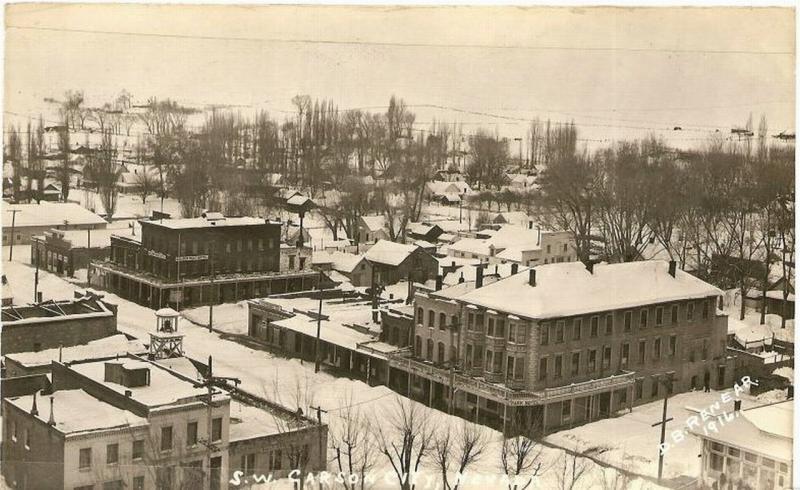 This fantastic view looks southwest from the dome of the Capitol Building in the winter of 1916. A layer of snow several inches thick lies on the ground and covers the streets, in the days before snowplows. The sidewalks have been shoveled, though.

There are lots of great details you can pick out of this photo, but probably the two hotels in the center can be called the star attractions. The dark hotel to the left is the St. Charles Hotel at the corner of Third and Carson streets, or at least that's what we know it as today. At the time of this photo, in 1916, I believe it was called the Golden West Hotel. The two sections were built as separate establishments; the three-story section to the north was commenced in April 1862, and was known as the St. Charles. The two-story building next door was started one month later, and was called Muller's Hotel. The two consolidated in 1894 as the Briggs House, then went through several more name changes over the 20th century.

The large light-colored building just right of center is of course the famous Ormsby House, but it went through a name change as well. Here in this photo it is called the Park Hotel, as you can see by the banner at the corner. It was built in 1860 at the corner of Second and Carson streets by Major William Ormsby, who was killed just months after its completion. At the time it was just a single story building at the corner; it was subsequently added to until it grew into what you see in the photo here. In the 1940s it had fallen into bad repair, and was demolished. The dark two-story building next to it survives to this day, though.

At the lower left corner is a block of buildings on Second Street. The single-story stone building on the corner was home to the Daily Appeal. The newspaper published from there for over 80 years before moving to larger quarters in 1948. All of those buildings were later razed to extend the Capitol Plaza south to the new State Legislature Building.

Many other little details can be seen in this photo. At the left edge, next to the St. Charles, is the false-fronted building that today houses Comma Coffee. At the lower right corner is a building along Carson Street that was torn down to build the Heroes Memorial Building. And in the background, residential Carson City sprawls out all the way back to the base of C Hill. At this point the town had been around for nearly 60 years, plenty of time for all those large trees to grow. A more in-depth study of the photo would certainly reveal many houses that are still around today, and just as many that have been torn down for new development.