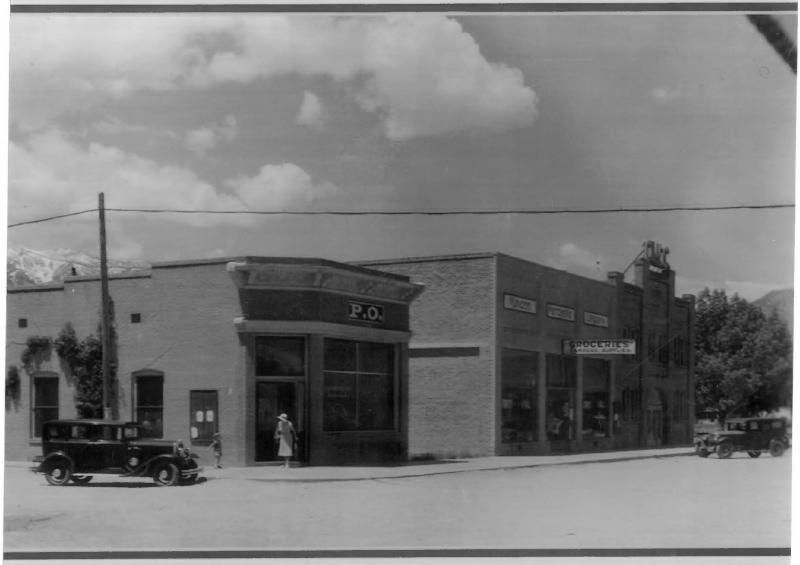 The first Farmers' Bank of Carson Valley housed the Minden post office in the 1930s. Behind that, along Esmeralda Street, is the Minden Mercantile and the C.V.I.C. Hall.

Source Caption: Douglas County, NV Listed: 04/06/2000 The 1909 Farmers' Bank of Carson Valley sits on a .06-acre corner lot in the heart of downtown Minden. It operated as the town's bank until 1918, when the financial institution moved to a larger building across the street. From 1919 to 1974, the building housed the Minden post office. The Farmers' Bank of Carson Valley was the second commercial building built along Esmeralda Avenue (the earliest was the livery stable, opening just a few months before the bank), but it is surrounded by other commercial buildings significant to Minden's development. Although no thematic study of western bank architecture was undertaken for this nomination, it should be noted that the style of the Farmers' Bank of Carson Valley, with its canted facade and corner location, was not uncommon. Similar bank buildings can be found in small agricultural towns throughout the West. The Farmers' Bank of Carson Valley is eligible for inclusion in the National Register of Historic Places under Criterion A for its association with the early development of Minden, Nevada, which was established in 1906 through the efforts of H. F. Dangberg, Jr., and the Dangberg Land and Livestock Company, founded by his father. Likewise, for its direct association with Minden's founders, the bank building is also eligible under criterion B. The basic themes in Minden's development are agriculture and the arrival of the Virginia and Truckee Railroad in 1906, but the region has a more involved history.