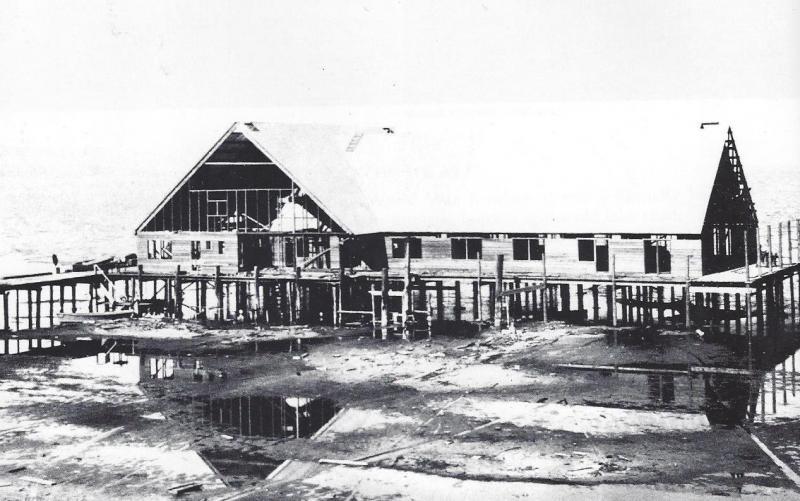 Globin's Chalet under construction in the Al Tahoe area of South Lake Tahoe. This dance house sat over the water on a pier at the foot of Sacramento Street. A longer pier to the right served the steamer S.S. Tahoe.

Source Caption: Some of these repostings are for the newer people on the site. Not everyone wants to scroll down hundreds of photos. I started out with not wanting to show the same photos twice, but that became unrealistic as the number of viewers has grown, so after six months or so photos may reappear even though I've seen comments saying they've already seen the picture, like they're the only people viewing the page. So if you don't like the repeats, what, change the channel I guess. I make these comments from time to time to get feedback. If I know what people want I can at least try to go that way, nevertheless this remains a history page not if you are probably from from such and such. Besides I enjoy seeing the old photos more than once and the comments change even though the picture doesn't. Having said all that: The photo below shows Globin's Chalet under construction at the foot of Sacramento Ave in summer 1929. Lake level being considerably low that year made it easier. This structure was built at the center of Lake Shore Park. As a kid I recall walking the park where the beach dropped off, but since it was all sand lyou could just jump down at any point especially if Mr. Globin as after you playing on his pier. Many bands played there like Tom Coakley, Eddie Howard, Dick Jurgens and off course Jim Burgett.