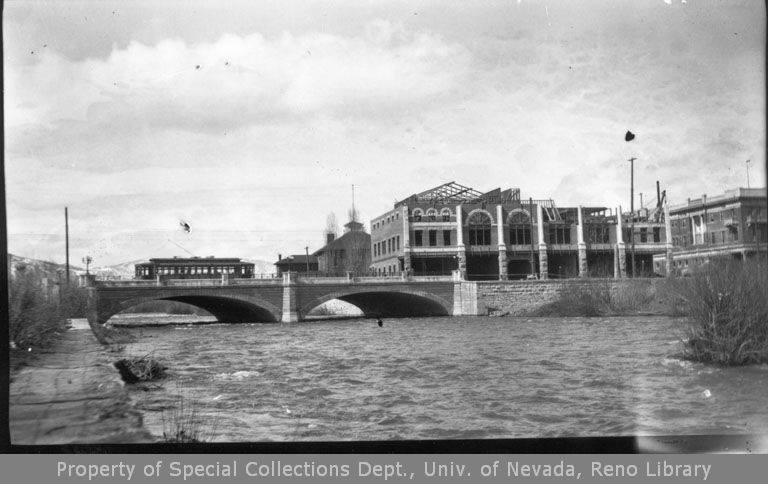 A streetcar from the Reno Traction Company crosses the Virginia Street Bridge across the Truckee River in downtown Reno. To the right the Masonic Temple Building is under construction.

Source Caption: 1916- Streetcars of Reno: Between 1904 and 1927, Reno and Sparks saw huge expansions in land and population. Nationally, the streetcar was an important transportation innovation to occur in turn of the century American cities. In 1906, Reno had a thriving central business district at the convergence of the Truckee and Virginia Railroad, the Southern Pacific Railroad and the Nevada-California-Oregon Railroad. Because of the demand for better transportation in Reno, streetcars were built in the Biggest Little City. Earlier attempts to construct a streetcar system dated back to the late 1800âs but all attempts failed until several Reno and Sparks businessmen organized the capital, equipment and community support necessary for what was to be known as the Nevada Transit Company. With Sparks emerging as a major center in the Truckee Meadows, the streetcar was necessary for commuters in both towns. The first line was constructed between the two towns in 1904, extending parallel to the railroad tracks along Fourth Street. The area between Reno and Sparks was sparsely developed, but it immediately served Sparks neighborhoods upon entering the city limits. The streetcar tracks turned south just before reaching Deer Park and continued east before terminating in Downtown Sparks in front of the Southern Pacific roundhouse and railroad yards. The initial line between Reno and Sparks was hailed by commuters and the community. People made the daily commute for ten cents, or five cents if traveling within city limits. It operated from about 6:30 a.m. to 12 a.m. on weekdays, traveled at about 10 miles per hour, and made the commute between Reno and Sparks roughly half an hour. The streetcar proved to be so popular that it underwent immediate expansion; the initial line was extended to the Virginia and Truckee Railroad Station at Commercial Row and Center and south on Virginia over the Truckee River in 1906; a line on Second Street was also extended to Keystone Avenue. Nevada Transit Company was later bought by Reno Traction Company, which continued to expand by adding new streetcars and new lines. The following year, a northern branch linked Downtown Reno to the new "streetcar suburbs" along Sierra Street before ending in front of the university. The only other company to successfully operate in Reno was the Nevada Interurban Railroad, which built a line in 1907 that complemented Reno Traction Companyâs existing streetcar network by providing new service along Plumas Street to Moana Springs. Reno Traction Company extended two new lines in 1910 to neighborhoods along Wells Street and along west Fourth Street and Ralston Street Like other American cities, cars and buses were becoming a more used and reliable means of transportation, as evidenced by the many garages and auto repair businesses in downtown areas by 1918. Renoâs streetcar system faced rising operating costs and soon became unreliable, underused and neglected, forcing Nevada Interurban and Reno Traction Company to tear up most of the lines in 1920. The last streetcar to run between Reno and Sparks was in 1927. July 26, 2014