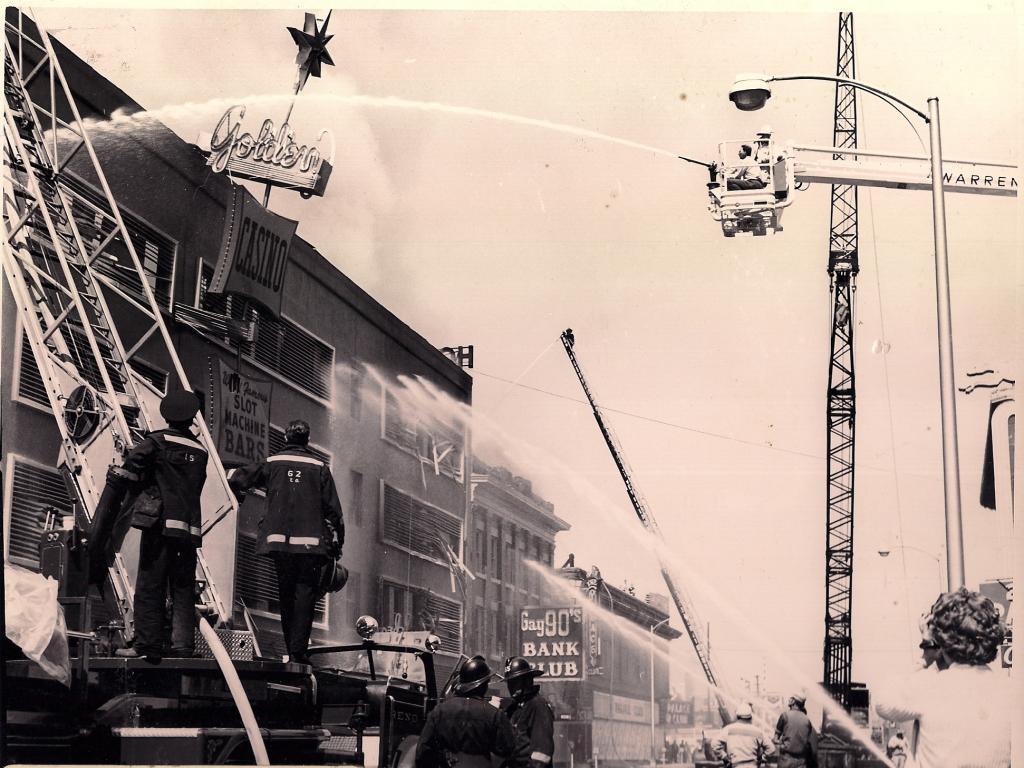 The Hotel Golden in downtown Reno caught fire on April 3, 1962. Six people died and the hotel was damaged beyond repair. To the right is the Gay 90's Bank Club and the Palace Club. The Bank Club also burned in the fire. The Hotel Golden was rebuilt, but they ran out of money before completion. Harrah's purchased the unfinished property and completed its 24-story hotel tower. The firefighters in the upper right were Les Groth and Ross Morres from Carson City's Warren Engine Co. No. 1.

Source Caption: Warren Engine Co. No. 1 volunteer chief Les Groth and Warren member Ross Morres operate Carson Cityâs 1962 Pittman snorkel at the Golden Hotel fire on April 3, 1962. Warren Engine Co. No. 1 joined resources from the Sparks Fire Department, Stead Air Force Base and the Washoe county Fire Department to assist Reno with the fire. Private resources also responded including bucket trucks from Sierra Pacific Power and Bell Telephone as well as a crane with a bucket from Reno Iron Works. The Warren Engine Co. No. 1 Pittman Snorkel was purchased by the Nevada legislature following strong lobbying efforts by the volunteer firefighters, local residents and local government officials. in 1961. The snorkel was presented to Warren Engine Co. No. 1 fire chief Les Groth in front of the state Capitol building by Government Grant Sawyer. Also attending the presentation were Ormsby County Assemblyman Archie Pozzi, Jr., who was also a member of Warren Engine Co. No. 1; Ed Kruse, state superintending of buildings and grounds; and Hugh B. âCapâ Matherly, the fire training instructor for the Nevada Division of Vocational Education. Les Groth was appointed Carson Cityâs first career fire chief in 1964 and served until 1978. Bernard âBernieâ Sease was hired as the cityâs first career firefighter on July 1, 1964, and would succeed Les Groth as fire chief, serving 1978-1990.