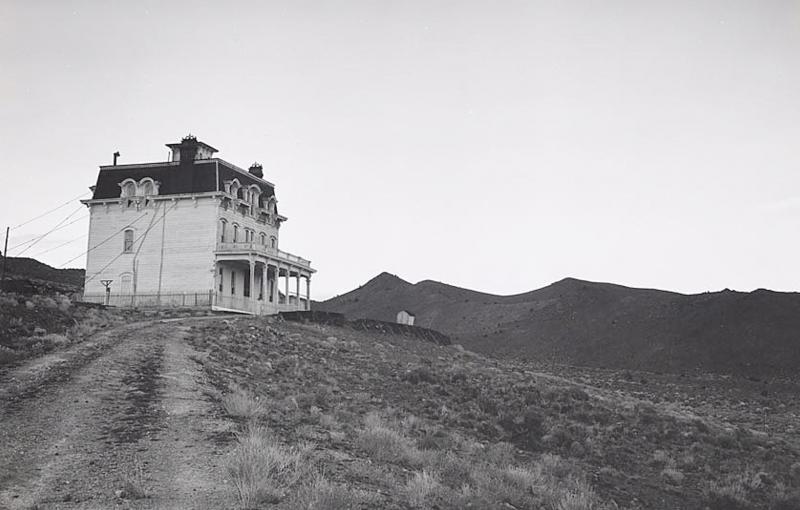 This mansion was built by Adolph Sutro at the mouth of his tunnel near Dayton. The house was meant to be used as a home for Sutro and his family, but the tunnel was not financially successful and the house became abandoned. It collapsed in the mid 20th century.

Source Caption: Near Dayton, Nevada, undated. Adolph Sutro House. Photo by Sonya Noskowiak, American (1900 - 1975) vintage gelatin silver print. Historic Deerfield Museum Consortium. When gushing hot water threatened the production of the ever-deepening Virginia City mines, bonanza-era entrepreneur Adolph Sutro offered an audacious solution. He would build a tunnel, an astonishing 20,489 feet long excavation th...rough the rock, from the Carson River Valley near Dayton, on a gentle incline up to the ComstockÃ¢â¬â ¢s mines at a depth of 1,640 feet. Sutro also had a mansion built for his family and, since the water from the mines was hot, he built an in-ground swimming pool and hot tub. The hot, soothing waters from the mines may have played a part his decision to build the Sutro Baths in San Francisco after he moved there. After nearly a decade of digging, the tunnel was completed in 1878, just as the rich veins of the Virginia City mines were beginning to play out. Sutro saw his moment, sold his tunnel, and moved to San Francisco. There, his Comstock fortune helped him build the Cliff House, the Sutro Baths, and the Sutro Library. He was the mayor of San Francisco from 1895 to 1897. Adolph Sutro died in 1898, but his engineering marvel on the Comstock, now mostly impassable, continues to drain hot water from the historic mines of Virginia City. The mansion is gone, but you can Explore the town of Sutro here; https://allaroundnevada.com/sutro-tunnel/ See More