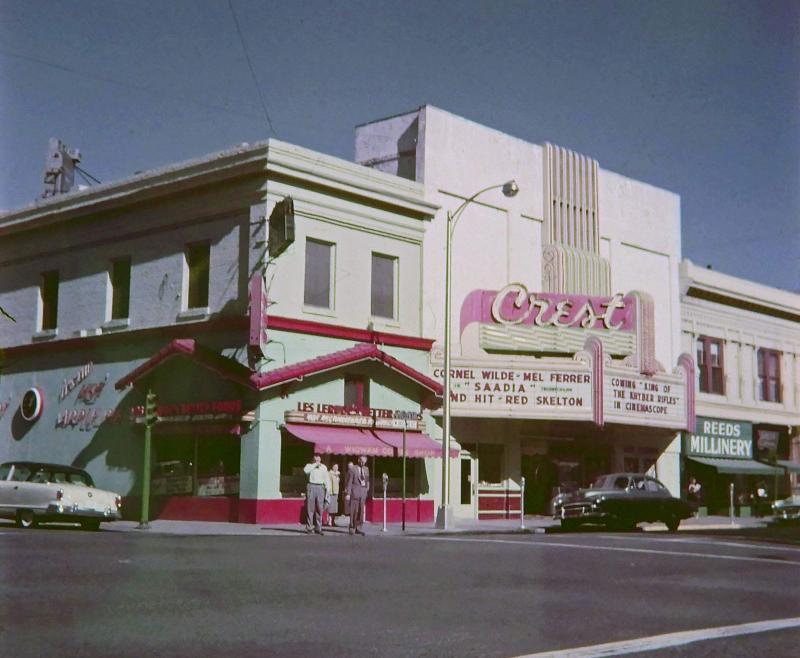 The northeast corner of Second and Sierra streets in downtown Reno. Seen here are the WigWam Coffee Shop, the Crest Theater (formerly Nevada Theater) next door, and Reed's Millinery. Upstairs is the Carlton Hotel.

Contributor: Zephyr America: A Lens on the Past on Facebook

Source Caption: THE CREST THEATER. RENO, NV. 1955 The "Crest" opened originally as the Wigwam Theater in 1909. It was renamed the "Nevada" in the early 40s, then was remodeled and became the "Crest" in 1948. Located on 2nd street in downtown Reno, between Virginia and Sierra streets, the theater was demolished in the late 70s to make room for the expanding Money Tree Casino... In a 1982 editorial remembering th...e town's lost theaters, Reno Gazette-Journal columnist Lee Herz Dixon wrote, "Where the Money Tree sometimes does business today stood the Crest, a postage stamp theater of narrow stairways that led to the bathroom and tiny exit doors that surprised passersby when the door opened to spit out patrons. The candy counter was almost in the street. Expressed kindly, the Crest was the least-elegant theater in Reno. My mother told me I'd get polio if I went to the Crest. (My mother also told me I'd get polio if I wore anything darker than colorless nail polish or pierced my ears. Momma lost a lot of control when the Salk vaccine was introduced.)" See More