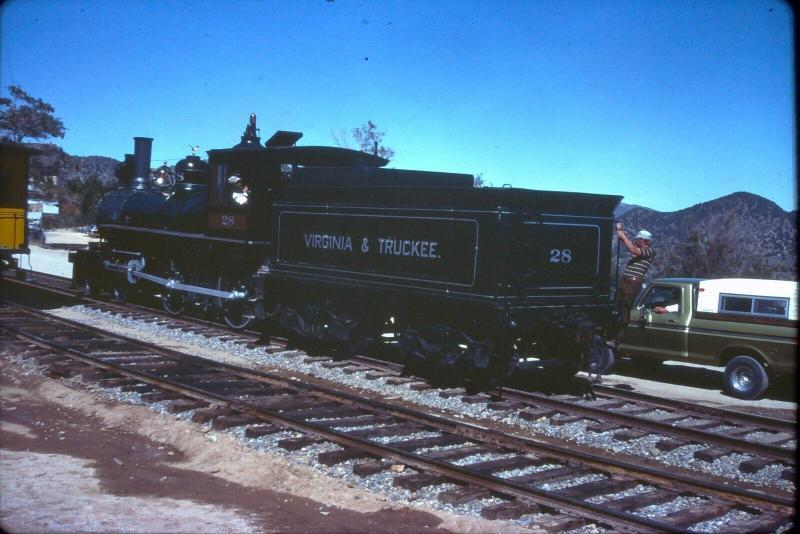 Virginia & Truckee locomotive #28 ran on the revived tourist V&T in Virginia City for one year, 1976. It was a rented engine and left the Comstock after that one year. Later it was purchased by the Nevada State Railroad Museum and renumbered #8.

Source Caption: While we're on the subject of the Virginia and Truckee, I'd like to bring up locomotive #28(Now #8 at the NSRM in Carson City). Built in 1888 by the Coke L.M. Works for the Denver, Texas and Fort Worth Railroad. Sold in 1907 to the Dardenelle and Russellville Railroad,it was then leased in 1938, and later sold in 1945 to 20th Century Fox.It was featured in movies such as Sentimental Journey, Cen...tennial Summer, and Scandalous John. After that,it sat disused on a back lot for some 10 years.It did serve an unspecified time on the Sierra Railroad in California before(and after)being purchased by Robert Grey's Short Line Enterprises in 1972,where it served for a short time on the Virginia and Truckee in Virginia City in 1976(where my parents and I rode on it in the summer of '76). She is also noted as having appeared at the Grand Opening of the California Railroad Museum in 1981. Also some time in 1981,she was bought by the Nevada State Railroad Museum and renumbered from #28 to #8. Sometime in 2008-2009, her firebox was severely damaged by explosions that were caused by her fuel oil hitting hot spots in the firebox. She was pulled from service to 2009 to await repairs. She still sits there to this very day... I found this picture of her on Ebay earlier today, and I thought that others might be interested in her, and the history of this seemingly forgotten part of V&T history.. See More