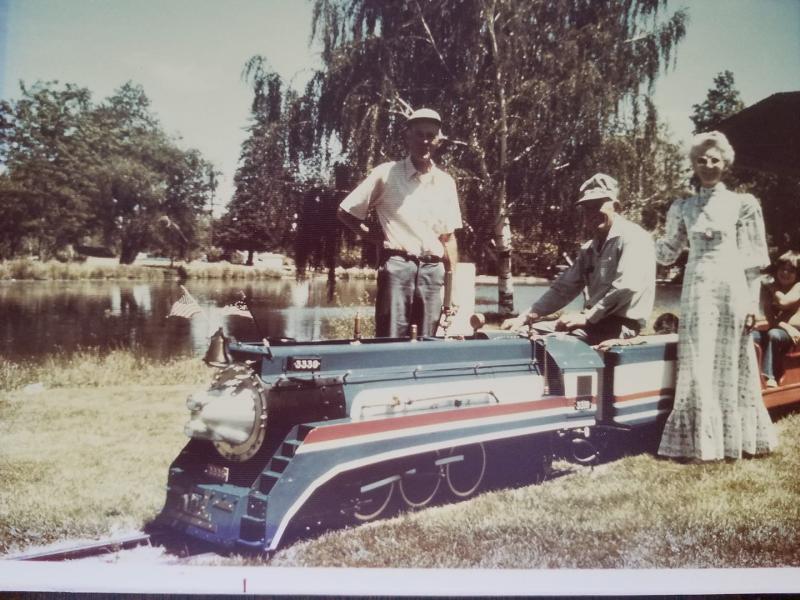 The miniature train in Reno's Idlewild Park. The train was owned and operated by Joe Cihura, and was started in 1962. The train had previously run in Vallejo, CA. In 1976 the locomotive was redesigned to mimic the American Freedom Train. Joe died in 1986 and the train was sold to other operators. This steam locomotive is now located at the Nevada State Railroad Museum. Joe's gasoline locomotive still runs at Idlewild Park. In this photo Joe is seated at the locomotive controls, posing with his wife Harriett and his borther John, who helped build the train.

Source Caption: That is my grandfather Joe Cihura. He built the train and and brought the train to Reno in 1962. He and my uncle laid the tracks and built the train shed, ticket booth, merry go round, planes and four car rodowhip. With the help of the Lions Club they built the kiddie park...hence the Lions head water fountain. Our family operated the park until his death in 1986. He also built the train below in 1976...it was a steam engine and was a replica of the Freedom Train...it is now in the railroad museum in Carson City. The train that is running now is his train...only painted a hideous yellow and green. Pictured are my grandfather Joe Cihura, John Cihura and my grandmother Harriett.