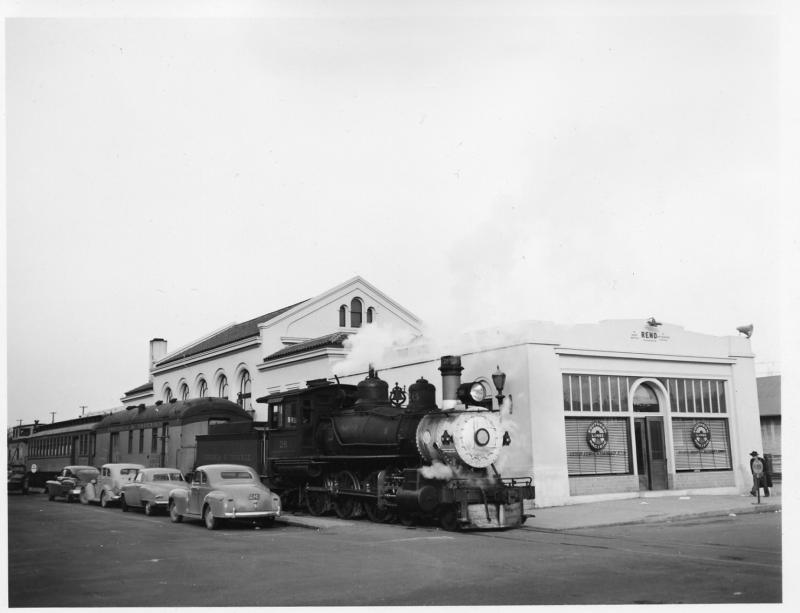 Virginia & Truckee engine #26 sits at the passenger depot in Reno. The Southern Pacific logo is seen on the close wall of the station.

Source Caption: As RenoÃ¢â¬â ¢s passenger and freight traffic grew, the Southern Pacific Railroad needed a larger, new depot. The fourth, and final, depot built along the Central Pacific/Southern Pacific was completed on February 8, 1926. The depot was built in a Mediterranean style and composed of a stucco exterior. The interior walls included Caen stone with a marble base. A terrazzo floor edge with marble rounde...d out the interior of the building. The new depot included the local offices for the Southern Pacific Railroad, as well. A track along the Commercial Row side of the depot served the Virginia & Truckee until it was abandoned in 1950. The Reno Depot served passenger trains of the Southern Pacific Railroad until 1971, including the fabled City of San Francisco and the Overland Limited. Since 1971, Amtrak passenger trains have called at the Reno Depot. In this photo V&T 4-6-0 No. 26 prepares for departure from the Reno Depot. Thoman Collection, NSRM. See More